Ok, we all know that we can use FeCl or a mix of muriatic acid and hydrogen peroxide to etch PCB, but those are nasty chemicals that I don't really want to mess with. Reading on the net I found people using white vinegar, hydrogen peroxide and salt, all stuff you can buy at your local grocery store!

This will be a multi-part post where I will show my experimentations on this. Note that I have never etched my own PCB so you will get the full newbi experience.

My first test is just to see if this mixture can really remove some copper. So I just cut a small half inch square and give it a try. 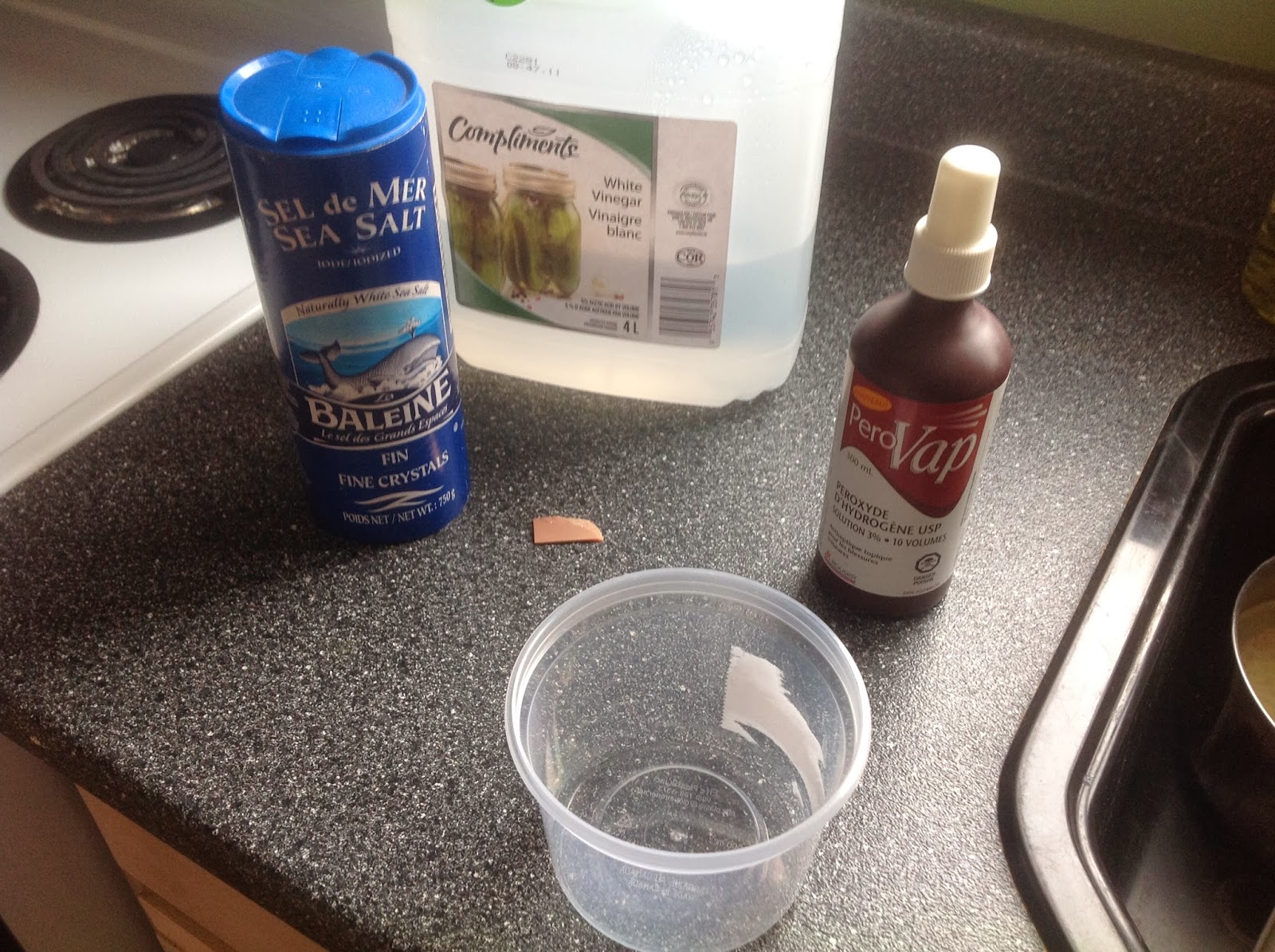 The mixture according to what I read is 60% vinegar and 40% hydrogen peroxide and some salt... So I measured that and put that in an old plastic cup and dropped my small copper piece in. 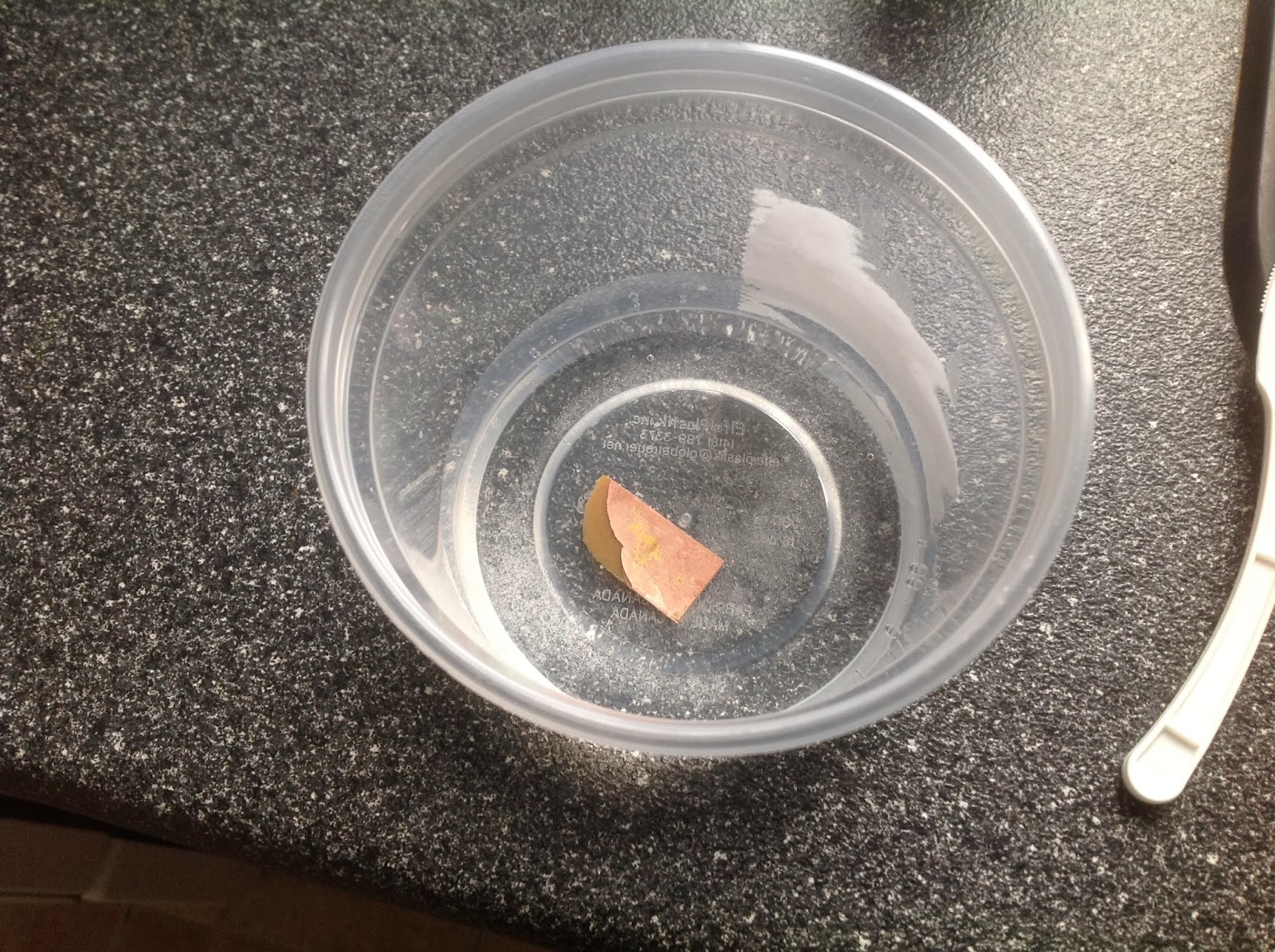 Apparently this thing is supposed to be bubbling... So I added a bit of salt directly on the copper piece. 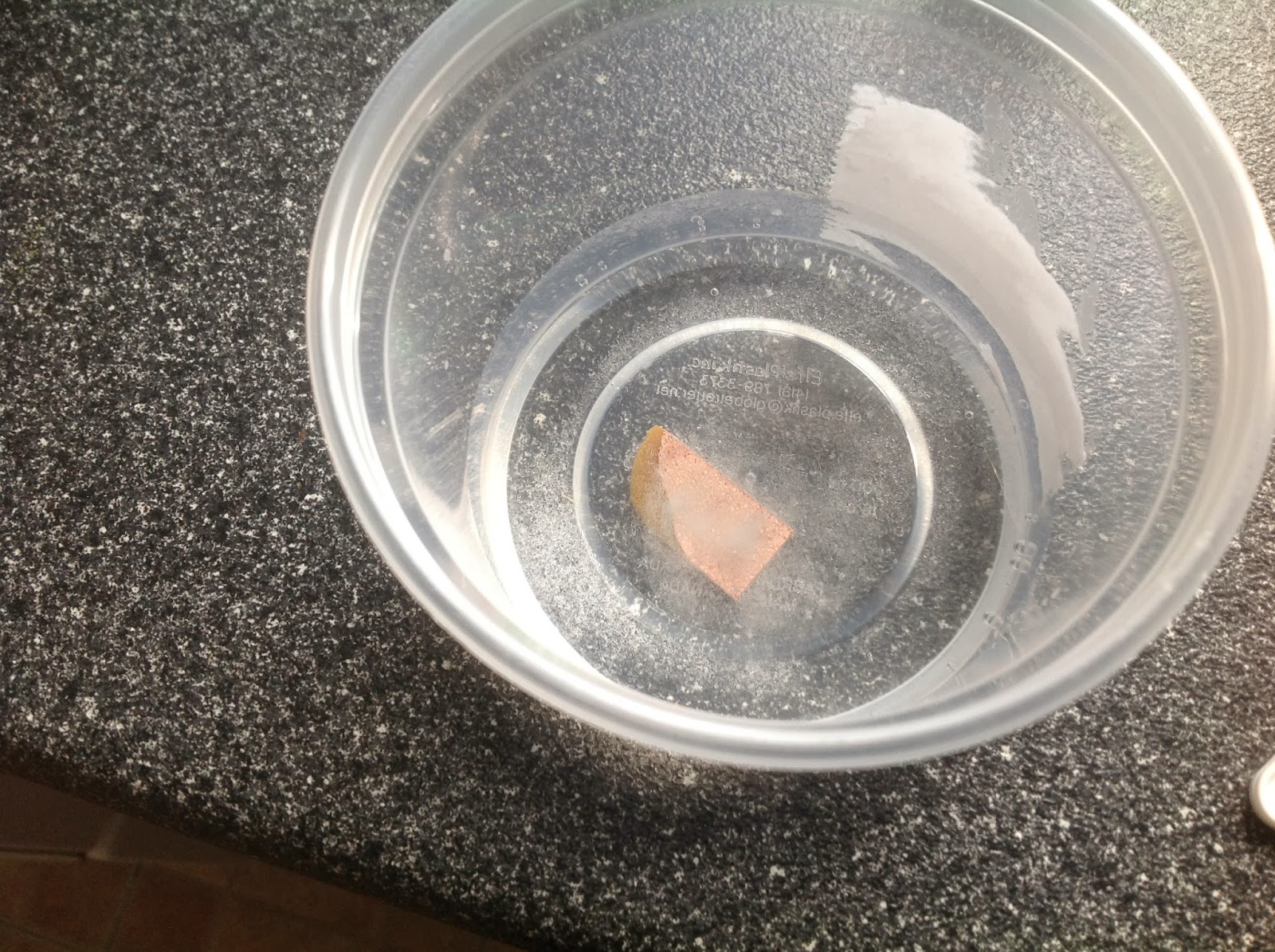 As you can see this had an effect and a reaction is occurring. I let it doing it's thing for 15 minutes:

It is doing something to the copper ! There was no more bubbling so added a bit more salt to start the reaction again: 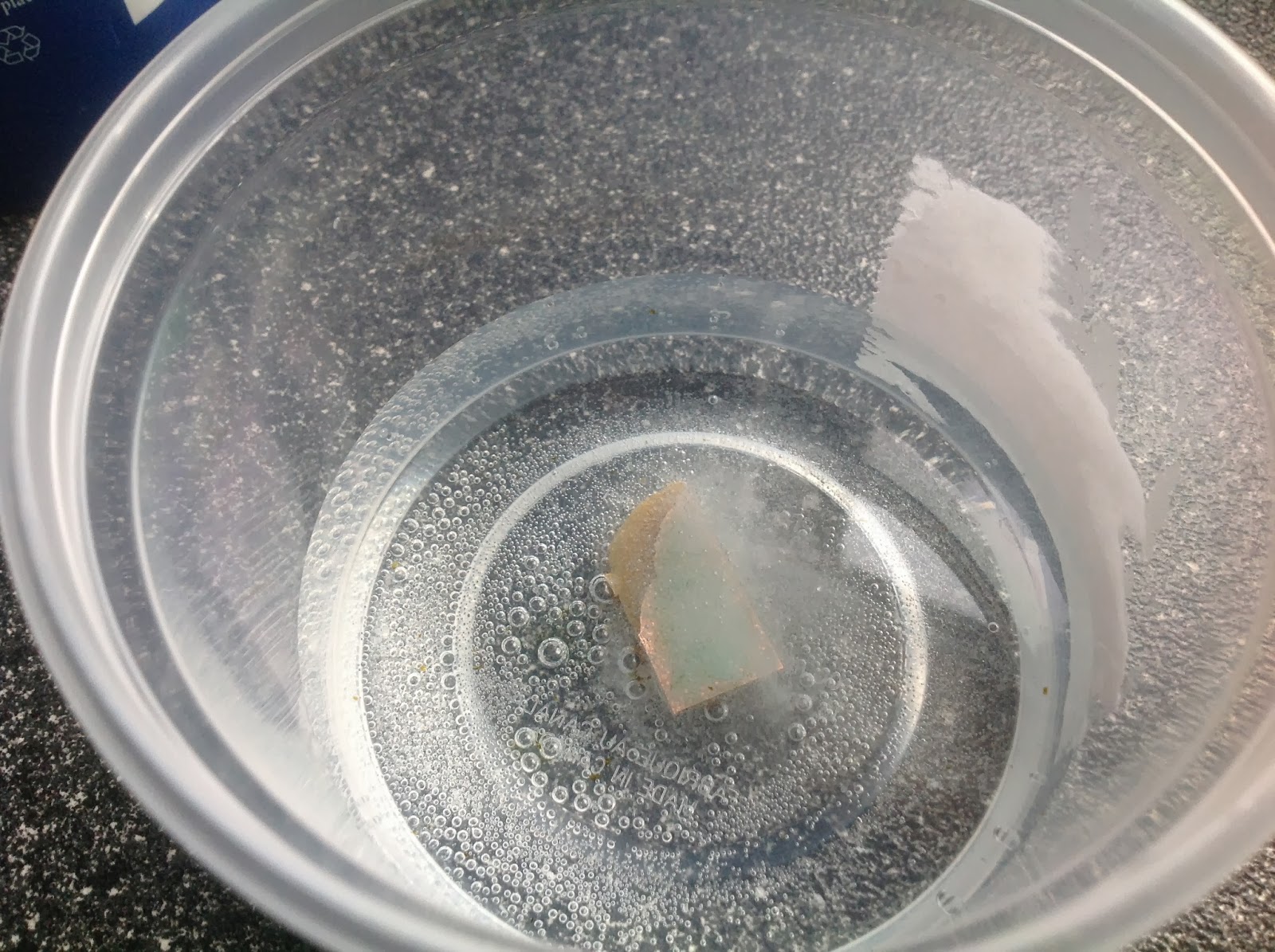 Not much more etching after 30 minutes:

After about 1h maybe I could see that the copper was thinning. So I added 1 part of vinegar and about 1 tablespoon of salt and put the container in a bath of hot water. 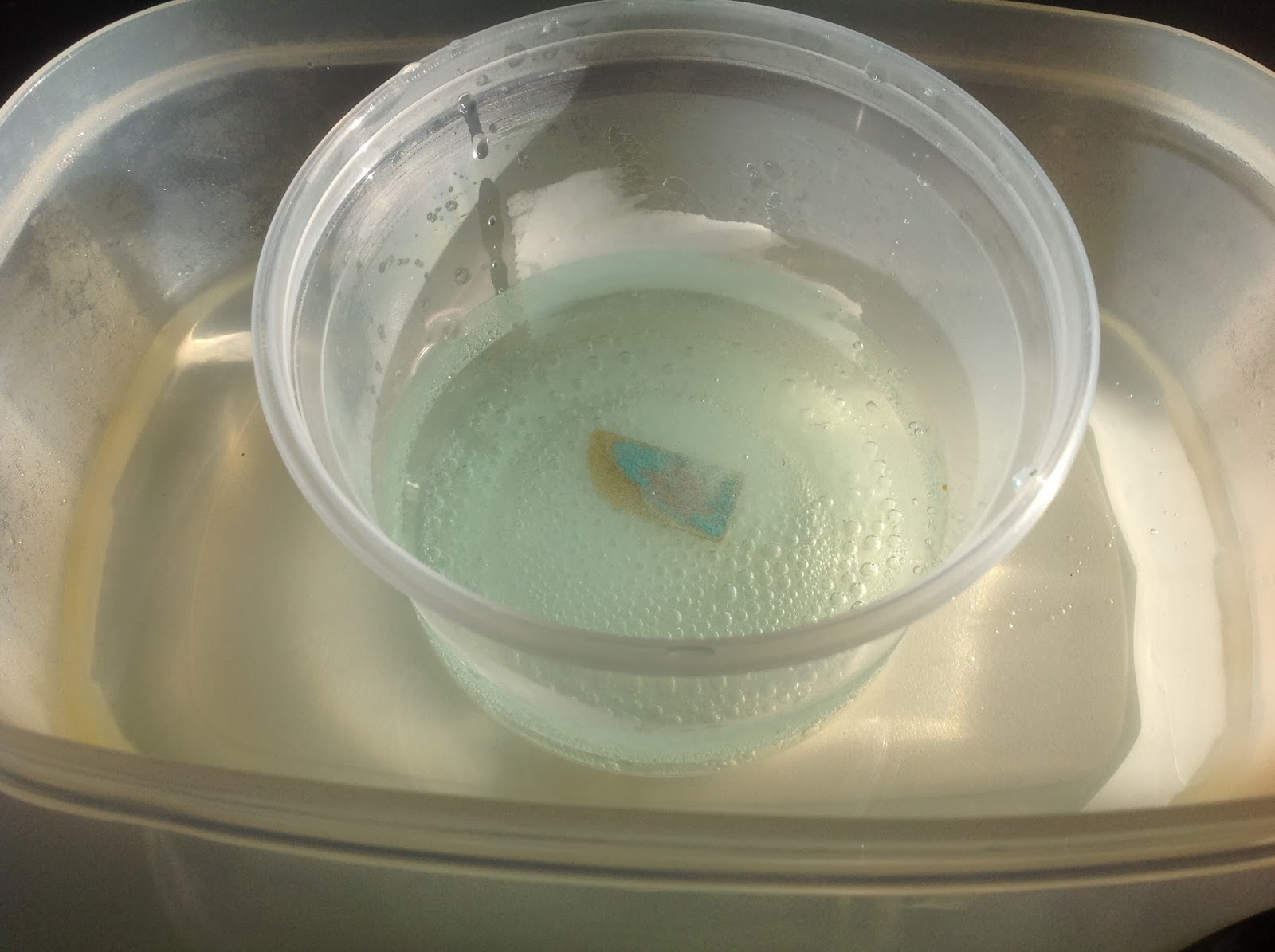 After about 1.5h it was pretty much done. I think the added acidity and hot bath really helped. 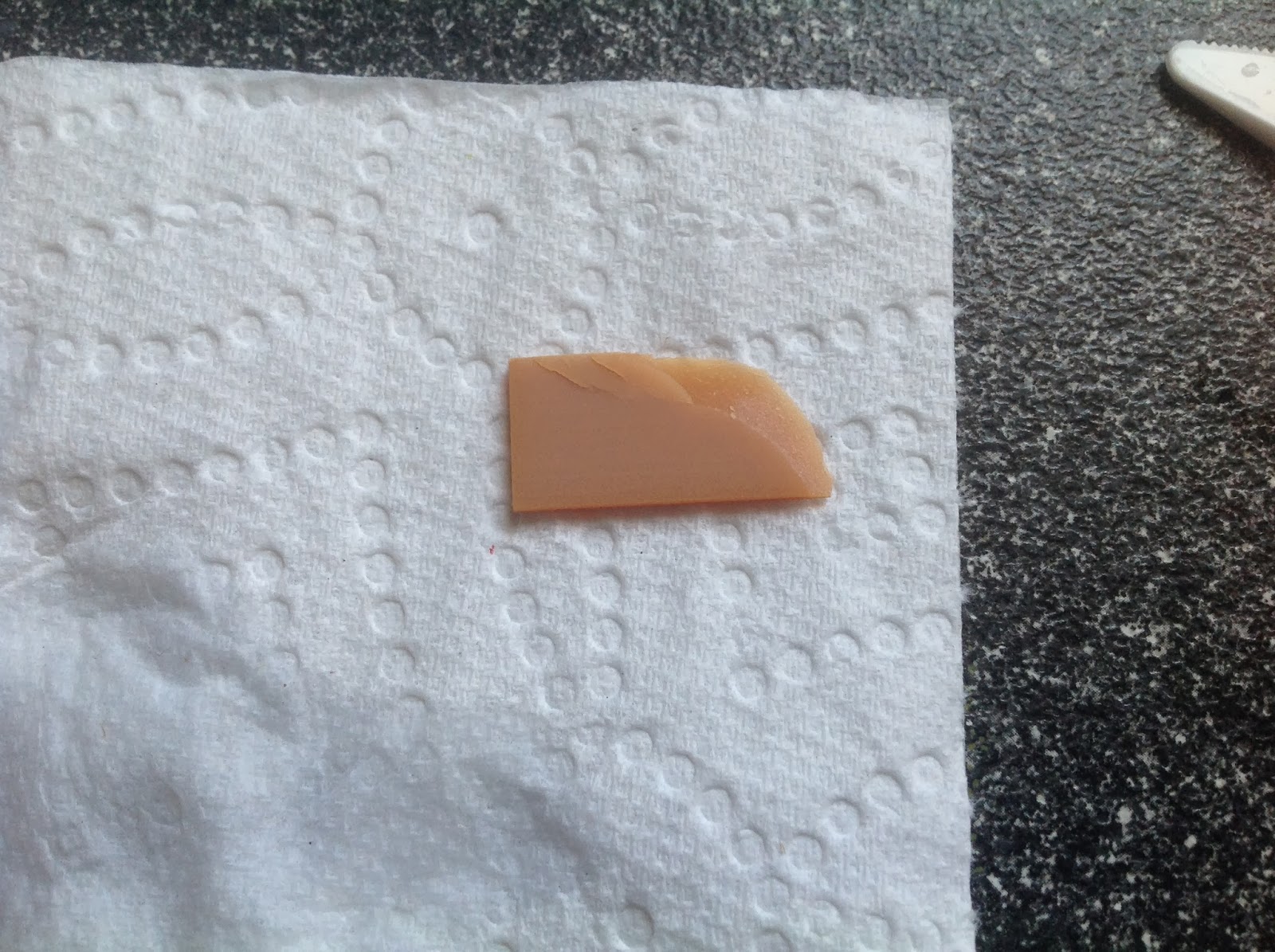 So myth confirmed, etching copper board with vinegar, hydrogen peroxide and salt is possible !

While this was going on I tried the PCB art work heat transfer method. This involves printing your artwork on a glossy paper and using a hot iron to transfer the laser printer ink (which is actually a plastic based compound) to the copper board. Well, that did not work out so good: 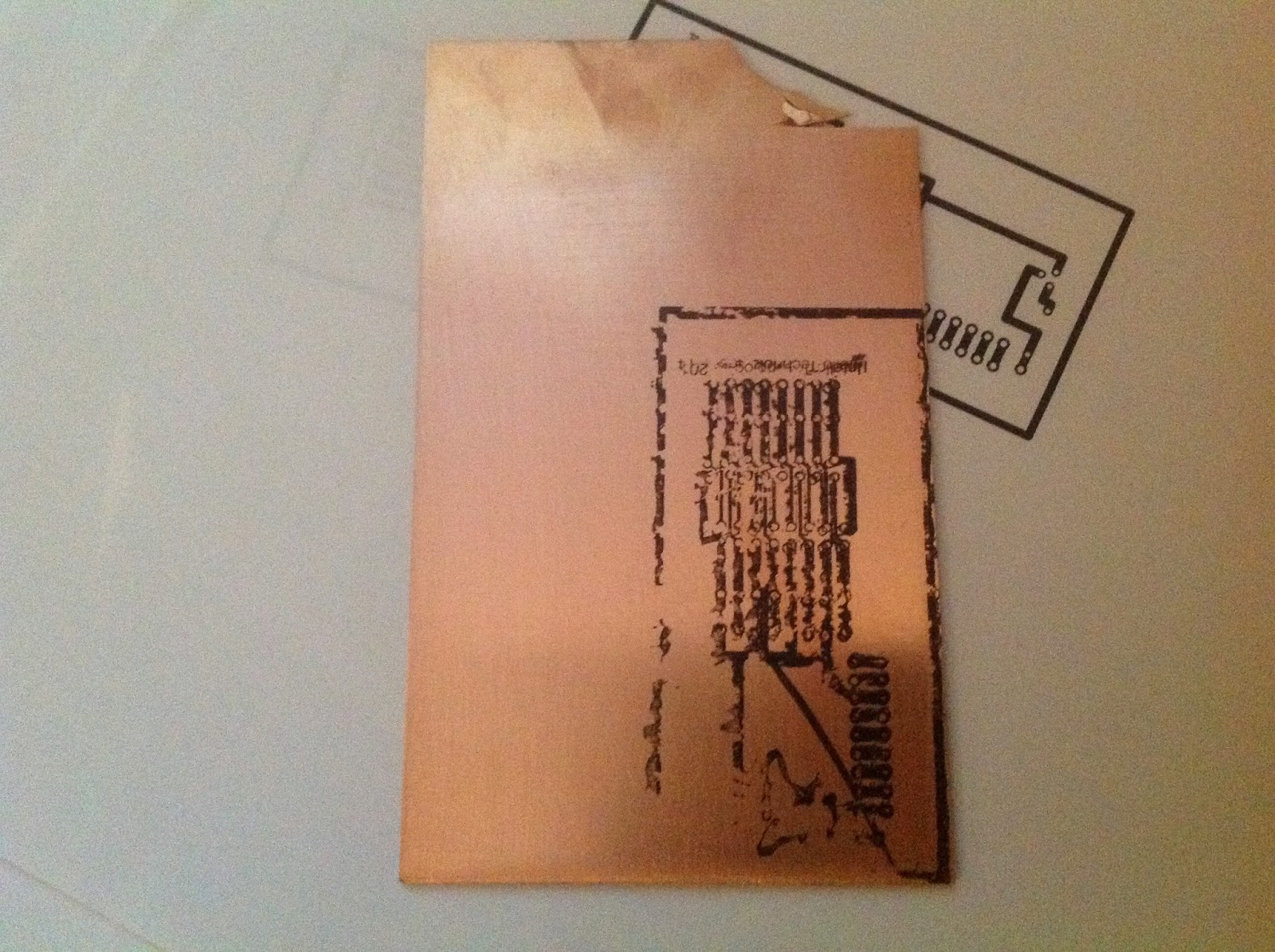 I used a 8.5x11 label backing paper as my glossy paper, may this was the problem. Thinking about it I did not wait for the copper board and paper to cool down before trying to peel it off. Dooh ! Also the glossy moves while I pressed the iron. Maybe I should secure it with tape or something.

So stay tune as I will be trying that again and writing a blog post as I go along.

- January 07, 2014
Email ThisBlogThis!Share to TwitterShare to FacebookShare to Pinterest